I've come up with a relatively easy to build DIY programmer. It doesn't require a parallel port, or dozens of transistors. It's Arduino based, and uses mostly common parts.
Here's what it looks like: 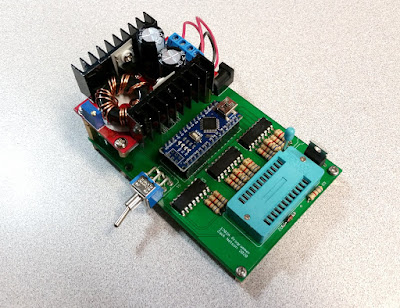 And here's a schematic: 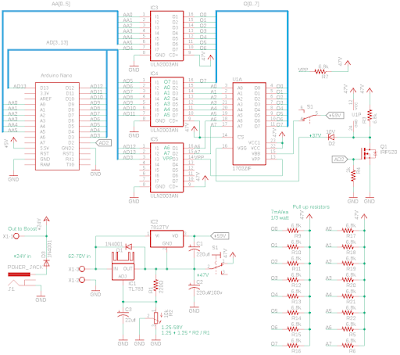 A boost converter daughter board is used to generate a high voltage, over 60V. It then gets regulated down to the various voltages needed. IC1 (TL783) has to be calibrated to +47V, then the other voltages will fall into place.
An Arduino nano is able to manipulate the high voltages through three ULN2003 transistor arrays, and one IRF520 MOSFET.

Right now the code is very crude, but functional. It's on pastebin here. The binary for the 1702A is included in the Arduino program. On power up/reset the programming sequence begins. It's finished when the pin 13 led stops flashing.
Posted by Zack at 11:00 AM