Here's one from the archives, a set of changes I made to a Boss DR110. Here's the finished product, rehoused in a gun case. 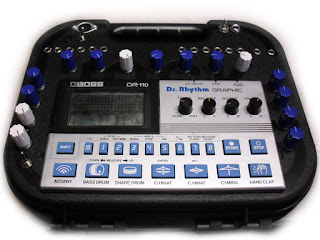 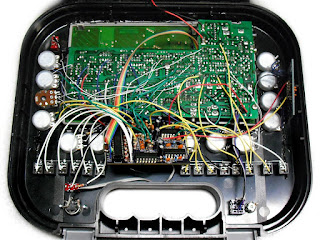 Here is a version of the schematic that includes the modifications. It's pretty rough, as I never intended to share it, but here it is. 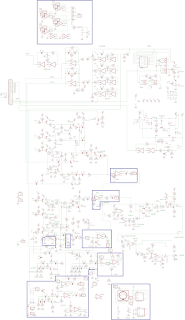 Most of the modifications are simple pot-for-resistor swaps and are already well documented. I scraped a few together in my notes:

Also included is the standard DINSync mod that uses a 74*74 as a clock divider. 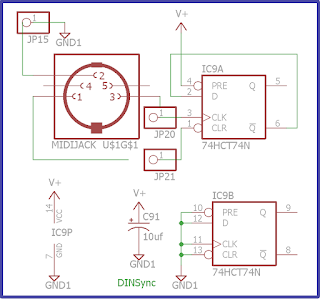 At the top is a simple replacement for the built in cymbal/metallic oscillator. It allows you to change each of the four frequencies. I designed a more complicated one that involved a kind of ring-mod, but it ended up inducing its signal into the other voices and causing a constant hum. 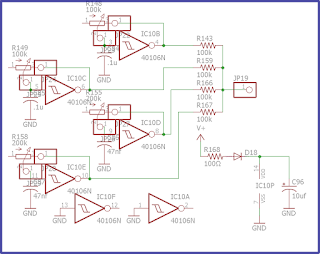 A large chunk of the circuit is devoted to buffering the voices for separate outs. I wanted them to be fully separate so that they could be added to/removed from the main mix and its accent VCA.

The trick is that all the voices are interconnected and load each other in a way that affects the sound. This means you have to add a resistor and/or cap onto each voice to simulate the load of other voices that are now disconnected. The values for these components are up to the user's preference. They affect things like volume, decay and sometimes tone. 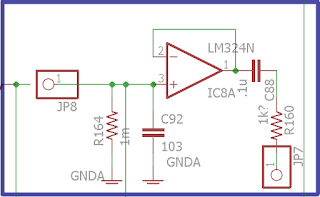 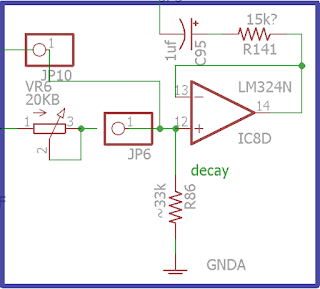 At the bottom is the second snare oscillator. It's a clone of the standard oscillator, but it's pitched a bit higher. It's similar in tuning to the 808's snare oscillators(depending on revision). Included is a mix adjustment between the original and new. 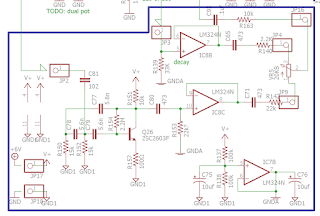 The last part is not pictured. It's an AVR that provides MIDI and trigger input functionality. It ties into the 110's button matrix and watches as it scans. Once the correct column is being scanned, the AVR controls the rows to simulate buttons being pressed. This leaves the original CPU to generate the triggers.
Here is the button matrix:

I designed an alternate way to provide trigger ins. You can add some tri-state buffers and use the column scanning signals to gate your triggers into the button matrix. The triggers come in the left side and pass through (when gated) to the right, pulling the rows low through diodes. Note, protection diodes are needed to make this tolerant of modular trigger levels. 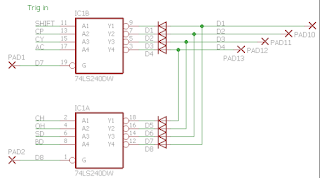 I developed a MIDI retrofit for the Pearl DRUM-X. It uses an AVR microcontroller to process MIDI messages, read timing signals, and generate CV/triggers. Here's a block diagram. 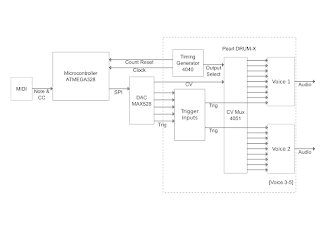 The CV comes from a single source and is multiplexed to the 40 destinations (5 voices * 8 parameters. The tricky part it that the DRUM-X controls the multiplexers while the retrofit board generates the CV. Two signals are used to synchronize them. I've labeled the signals "Count Reset" and "Clock". "Count Reset" sends a pulse when the multiplexers are pointed at the first destination. "Clock" sends a pulse each time the destination is changed.
Here are those two signals in the schematic: 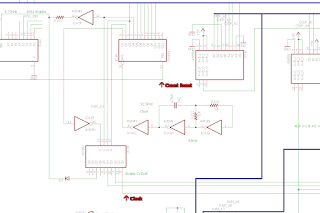 The DRUM-X is velocity sensitive when sent variable voltage triggers. To take advantage of this I used a multi-channel DAC to generate similar triggers. The retrofit maps MIDI velocity messages to voltages for the triggers.
The DRUM-X has a jack built in that can receive triggers, likely from a proprietary device. I was able to reuse the connection for my retrofit. It's wired such that you can still connect and use pads/other external triggers. Here is a schematic of the trigger daughterboard.