Here's a circuit I came up with a while back. I had a DR-110 with a dead digital board. The digital board is responsible for generating all the triggers in the system, and it generates some very specific triggers for the clap circuit.

CPI is three 1ms long pulses, every 10ms (100hz).
CPII is a separate pulse also 1ms long, that falls 10ms later.
I re-implemented this in the following circuit.
Traces from top to bottom are CPI, CPII, and Trigger in. 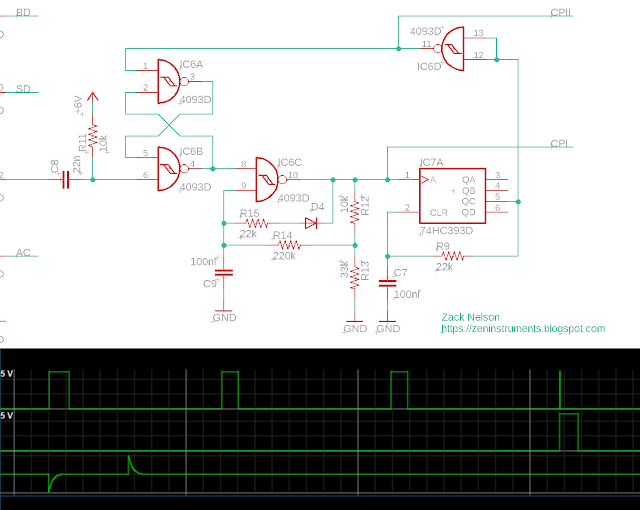 The traces are from a simulation of the circuit, that you can play with in real time here.

Breaking down the circuit, we start at C8 and R11. These form a hipass filter for the incoming trigger. This ensures that long triggers will be handled the same way as short triggers.

IC6A & B are schmitt NAND gates and they form an SR latch. It is set by an incoming trigger, and is reset by the CPII pulse. The output is used to enable the generation of the CPI signal.

IC6C is the core of an oscillator that can be enable/disabled from pin 8. It works by charging and discharging C9.
R14 sets the charging rate of C9, and determines the low time between pulses.
R15 and D4 set the discharge rate, and determine the length of the pulses.
R12 & R13 help bias C9 near the threshold voltage of IC6C. This ensures that the first pulse will be close in length to the following pulses. If C8 had to charge all the way up from ground, the first pulse would be much longer.

IC7 is a counter, and is keeping track of how many pulses have been seen on CPI.
Once the end of the third pulse is counted, output QC goes high. This resets the SR latch, disabling the oscillator, and very quickly stopping the fourth trigger.
Output QC is also used as our CPII signal. To limit it to 1ms in length, we use it to charge C7 through R9. After about 1ms, C7 has charged enough to trigger the CLR pin of the counter. This causes output QC to go low again and discharge C7.

So, with some simple tweaking, this circuit can generate different lengths, rates, and numbers of pulses.